The Refugees International organization has called on the international community to make a collective effort to end the suffering of the Rohingya Muslims in Myanmar, Press TV reports. 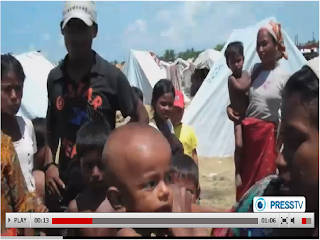 Sarnata Reynolds, the program manager of the rights organization, told Press TV in an interview on Friday that the responsibility of supporting the Muslim minority in Myanmar has to be shared by the international community.
“People are fleeing prosecution and they are fleeing hunger and violence, and they are fleeing the fact that they have zero human rights that no one would protect them. So when they take boat voyages or flee away, they need to be accepted. They need to be provided with refuge,” Reynolds stated.
She added that a large number of Rohingyas have been displaced over the past decade, but “only 3,000 of them are recognized as refugees who are given access to the UN refugee agency and other humanitarian agencies and the rest are basically on their own and in terrible conditions and of course always under deportation or arrest.”


Reynolds also urged Myanmar’s neighbors to keep their borders open for the Rohingyas fleeing the sectarian violence in the western state of Rakhine.

Rohingya organizations and activists around the world have declared November 8 a global day of action to draw attention to the ongoing plight of Muslims in Myanmar, calling for the deployment of United Nations peacekeepers to Rakhine.
Myanmar’s government refuses to recognize Rohingya Muslims as citizens and labels the minority of about 800,000 as “illegal” immigrants.
More than 100,000 Rohingyas have been displaced since the sectarian violence broke out in June, according to the UN. The humanitarian situation continues to deteriorate.

Source
Posted by Unknown at 1:21 AM